I know today is supposed to be guest blogger Friday, but I've been absent for about a month so I thought I would do it this week. Sorry if you were looking forward to a guest blogger, I'll have one again next month for you.

Since last year, Elijah has been asking for an airplane party for his birthday. I had the theme picked out for the year but I didn't plan too much just in case he wanted to change his mind, which every three turning four year old does at some point. But the airplane idea stuck, so after Chloe's birthday I started to plan out his party. I have to say this was easier to plan since plane parties are so common. I had a lot of fun with it too. It reminded me of being back in grade school folding airplanes and using poster board. I do have to admit while this was the most cost effective party I've done so far, it probably was the most time consuming. It took me about a solid week of non stop working to do everything for his party. (I really need to learn not to procrastinate!) I got pretty much everything that I wanted to do for this party (which is a first) so was really happy how everything turned out.

I wanted to make his party a little different than all of the ones I've seen, so I made his theme a paper plane pilot program. My sister in law, Bonnie, is incredible and ridiculously talented with graphic designs and she made me invitations for the party. I wanted the pilot to look like Elijah, which he was really excited about. He also chose to have Elijah Airlines and wanted everything to be blue. I also used the graphics from the invite throughout the rest of the party decorations. 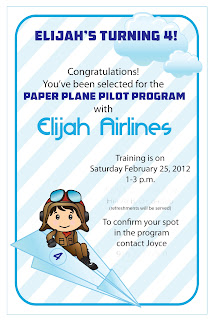 I made a poster to greet everyone at the front door. 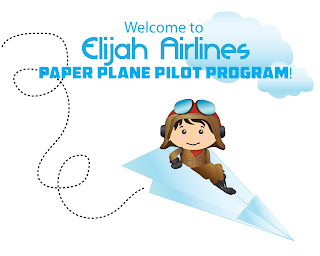 For decorations, I made {paper plane garlands} and strung them up to go into a point over the tables. I also strung a few planes up throughout the house. 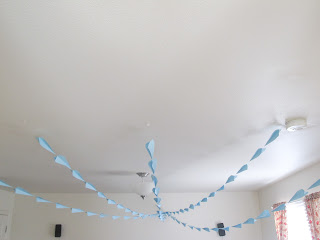 I really wanted to have airline posters of different destinations for the party, and luckily I have family members that travel. A HUGE thank you really goes to my sister in law, Annie, since I used most of her pictures of Europe and Costa Rica and Alaska to make the posters. My other sister in law, Kayla, contributed Hawaii for me and I had the rest of them. I put up the posters around the house. 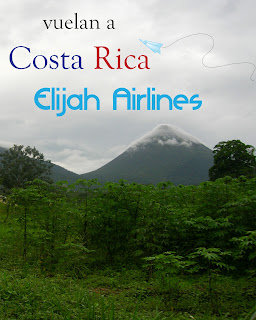 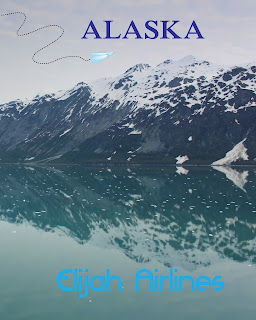 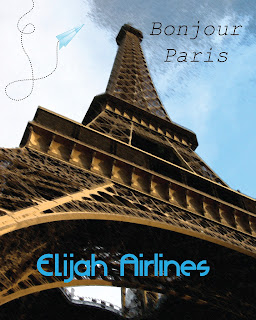 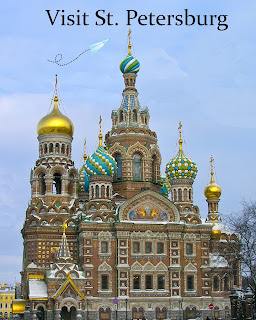 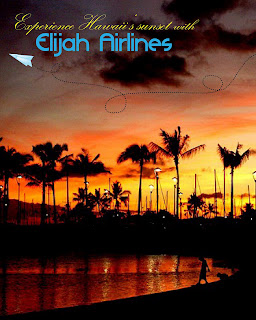 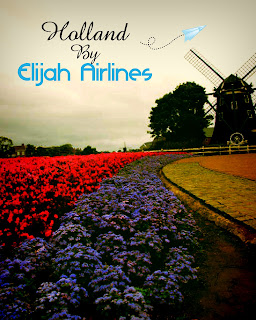 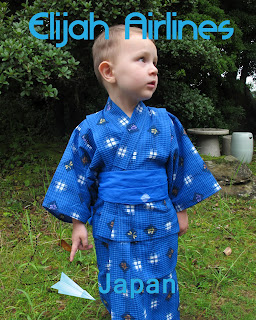 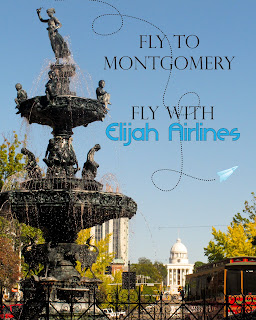 I also made cloud and planes mobiles to hang up in his room, where we had all of the games in. 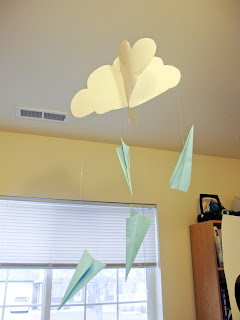 For the games, I wanted them to go along with learning to be a pilot, so for the first game we played red light green light to "learn how to take directions" and earn their compasses. The kids had a blast with it. Each round they had to do something different to get to the "air traffic controller" and the first person to get to them got the next turn of raising the flags. 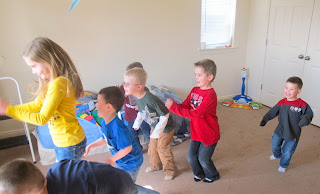 (this was the kids doing the kangaroo hop)

The next game we played was "learning to navigate a plane on the ground" so they had to go through an obstacle course riding little airplanes and they were able to earn their survival toy which was a paratrooper. The kids had fun going through the obstacle course, but I think they had more fun playing with the paratroopers which they had races throwing them down the stairs. 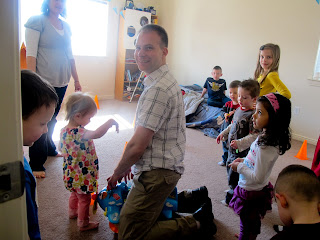 (Jed showed the kids how to do the obstacle course) 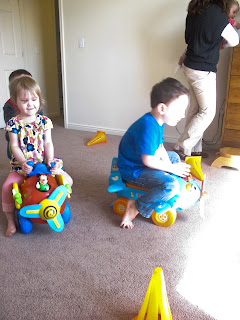 Our last game, they had to check their "flight skills" and make their own paper airplane and do a plane toss. The little kids got to stand on a stool and even Chloe was able to get hers to fly through the holes. 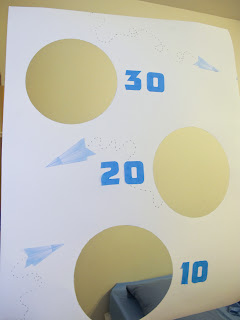 After the last game, the kids earned their wings and their pilot licenses. 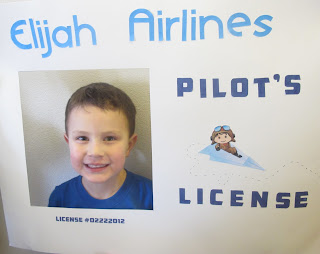 For this party I made the food table really simple. 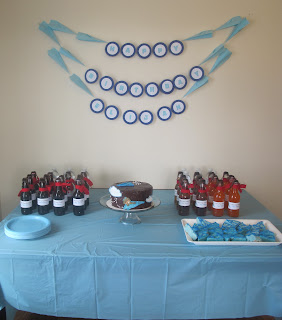 Over the table, I made a "Happy Birthday Elijah" garland using the same technique as the paper plane garland. 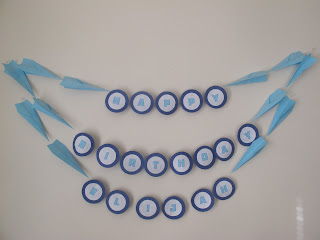 I decided to do "pilot pop" for drinks and found {this tutorial} for the pilot hats ( I was planning on making a hat for Elijah too, but ran out of time). I also made labels for all of the drinks using the same graphics from the invitation. 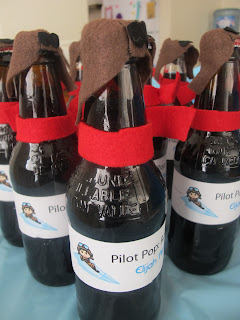 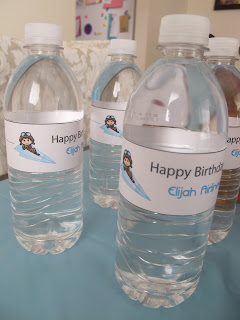 Elijah had been asking me for rice krispie treats so I made them for his party and covered them in melted vanilla. I tried to make them look like paper planes. I did the cake for his party and have to admit that this might be my favorite looking cake that I've done so far. I made fondant cutouts of clouds and paper planes and even made one of the little pilot in the paper plane then piped on dashes after the planes to show their flight patterns. His cake was dark chocolate filled with blackberry jam and cookies and cream buttercream and covered in blackberry chocolate ganash. 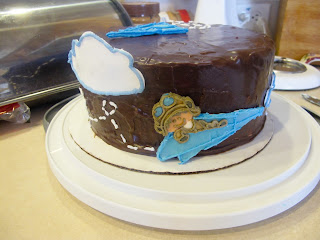 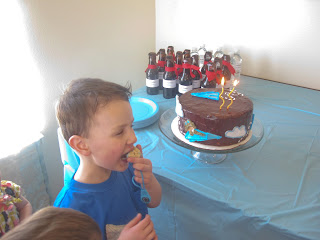 Since I had an extra 15 minutes before the party I quickly sewed on a paper plane to a shirt for Elijah. (I like when even their outfits fit the theme, I know I'm ridiculous) It was a really good thing I made the shirt for him too, because he pretty much ruined it with stains and it was only $3 for the the shirt so I'm okay with it. :) 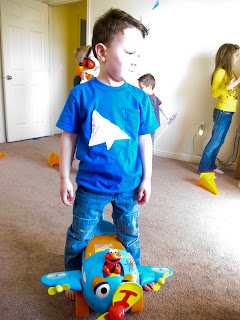 For party favors, I made little " pilot suitcases" out of cereal boxes with each child's name. I filled them with "an advanced flight manual" which was a booklet of how to make complex paper planes. (You can find directions all over the internet for them) and I did a "complimentary of Elijah Airlines" bags of homemade cinnamon and sugar pretzels and honey roasted peanuts. 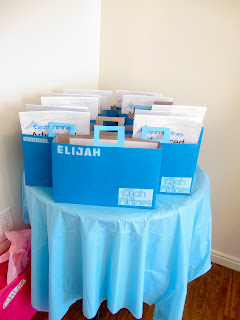 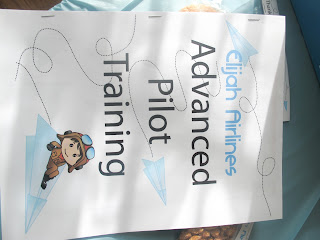 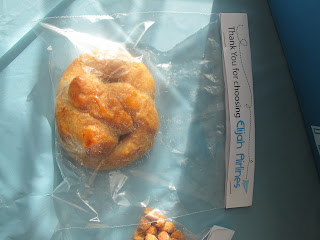 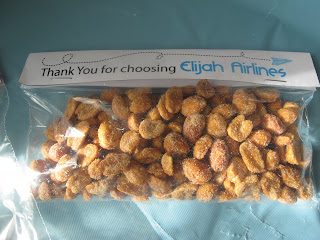 I also wanted to add another thank you for everyone who helped me with this party and all who came!
Posted by Joyce at 9:47 AM